This project started as a challenge to fix a three decade old custom shower with some cool Miami Vice features like a glass block wall and wall-mounted water jets. Unfortunately, the shower also had some not so cool ‘features’ like grungy and uneven floor tile and not so well done tile stripe accentss: 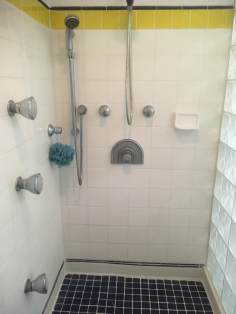 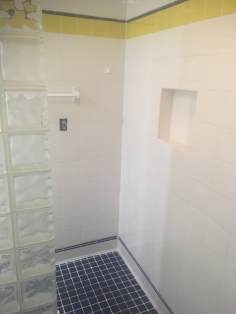 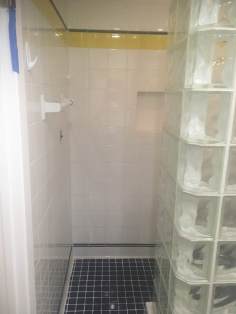 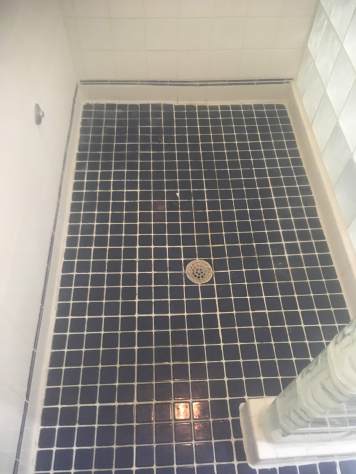 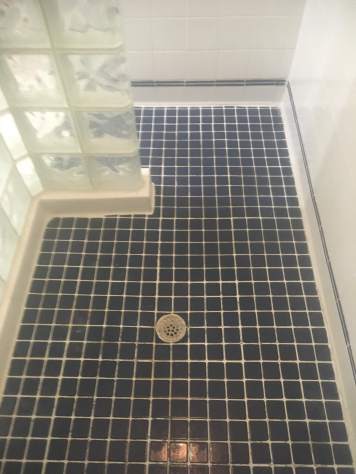 But most importantly, the shower was leaking from the base and sending water into an exterior wall. Not good. So this project started as yet another another leaky shower repair. It turned into a fantastic nearly-complete upgrade.

If you’d like to skip ahead to the tile install and final result pics, then click on this “Custom Shower Upgrade: part II” link. But for all the pre-tile prep deets, keep reading!

It was kind of odd that the clients were experiencing mold growth on the outside of the brick exterior wall where the showerhead and valve was located, but no other symptoms of a sudden water pipe leak. If a shower was originally installed so well that it remains watertight for 30 years, then it’s like a diesel truck that’s already cleared 200k miles. Driving on to 500k should be no problem at all.

Which made all the symptoms of a slow shower base leak (persistent musty smell in one corner of the large walk-in shower, and mold growing on the exterior brick on the other side of the shower wall) really odd. If a pipe in the wall had suddenly developed even a small drip-leak, the resultant couple gallons or more of water per day put into the wall would cause a soggy mess that would’ve essentially melted the entire adjacent interior wallboard. The problem had to have been on the drain side putting a couple of ounces per day into the wall for every day the shower was used, not the water supply-side dumping gallons.

So, there were two fix options:

But the clients then came up with a very creative third option of demolishing the entire shower to the studs to start over BUT still keep the cool 80s -style glass block wall (thus avoiding spending $2,000+ on either a huge custom glass panel or an even huge-er custom glass door system).

Here’s the plan that we went ahead with:

Did it all go according to this plan? Read on if you’re curious about the details, or just skip ahead to “Custom Shower Upgrade: part II” if you’re just wanting to know how it all turned out!

Taking a leaky shower down to the studs is the only sure way (short of x-ray vision) to know what’s going on underneath the visible surface tile and grout layer. This demo quickly revealed a very unique reason for the seemingly odd leaky waterproofing symptoms.

The shower “pan” waterproofing was a thick custom installed fiberglass liner, which is great for very traditional shower waterproofing. What wasn’t so great was the complete lack of any preslope for the fiberglass pan, which meant that moisture absorbed by the concrete layer underneath the shower floor tile had nowhere to go: 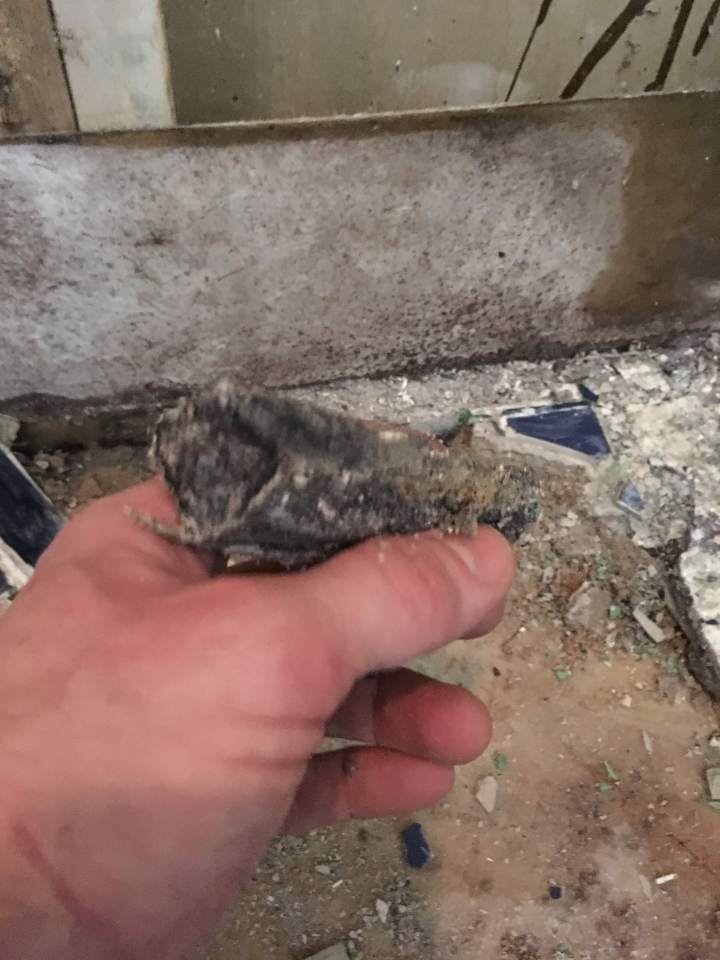 The whole perimeter of the shower floor was therefore a moist moldy mess even though the clients hadn’t used the shower for a whole month before demo. The lack of a shower pan preslope also really exacerbated this major problem: 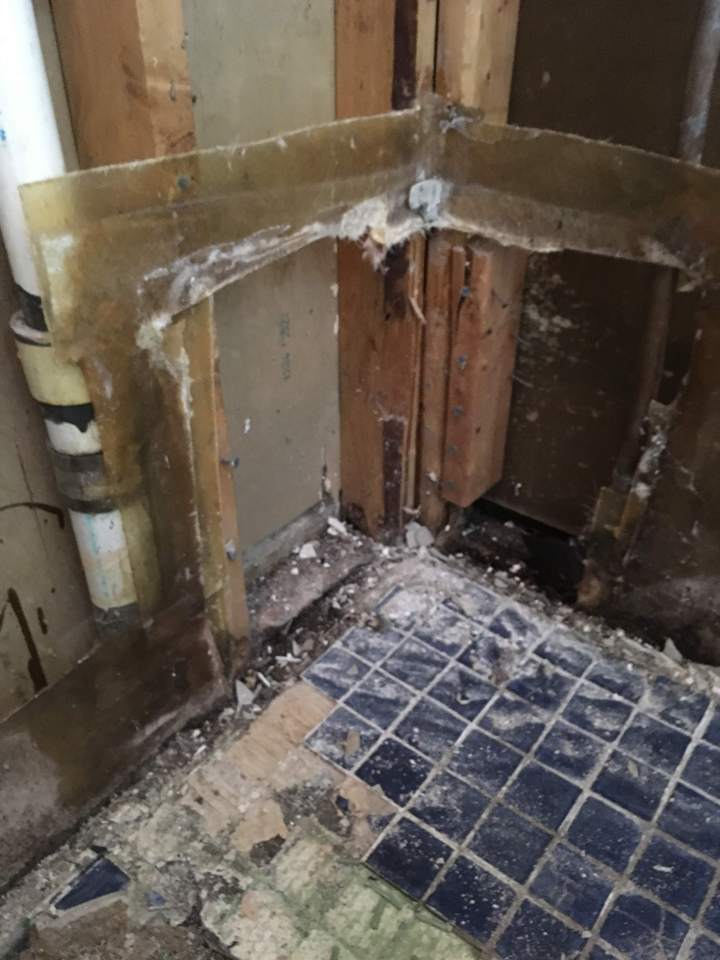 There used to be a shower bench in that corner, properly wrapped in fiberglass to integrate it into the rest of the shower ‘pan’ waterproofing. But at some point (probably just before the home was sold to my clients two years previous), the shower had been ‘updated’ to eliminate this bench. Whomever did the ‘remodeling’ simply sawed through the fiberglass waterproofing and then just patched the surface tile to blend with all the original tile surrounding it.

The surface finish work was done so well that even I hadn’t spotted it initially: 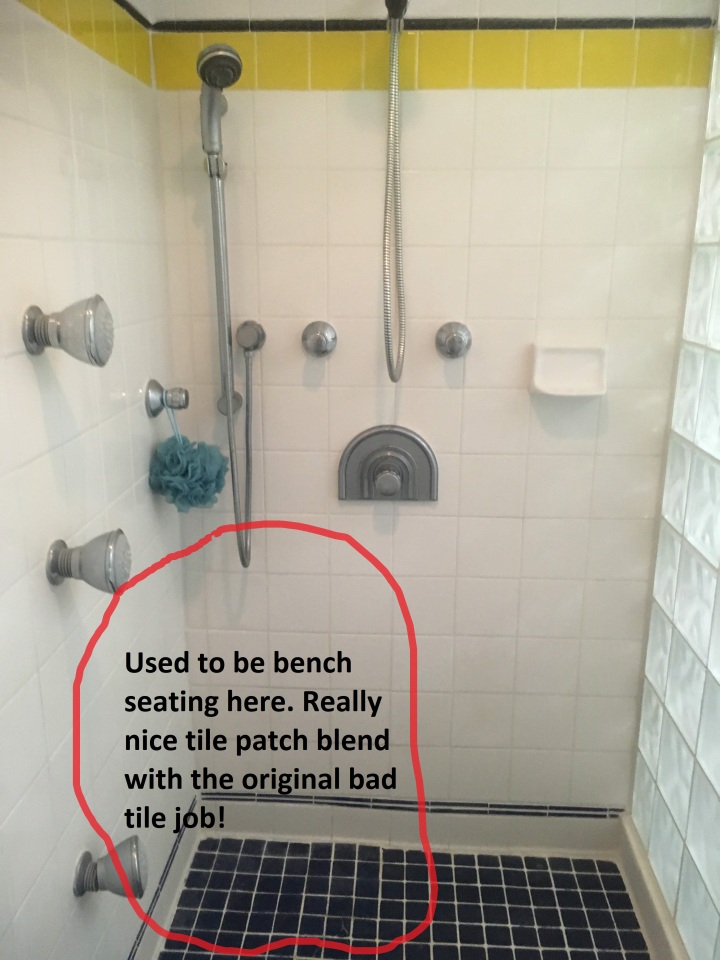 What wasn’t super at all was what was done to the original fiberglass waterproofing layer in the process. By simply sawing through the fiberglass in that corner and then not patching the waterproofing AT ALL, the result was moisture dumping directly into an exterior wall every time the shower was used. 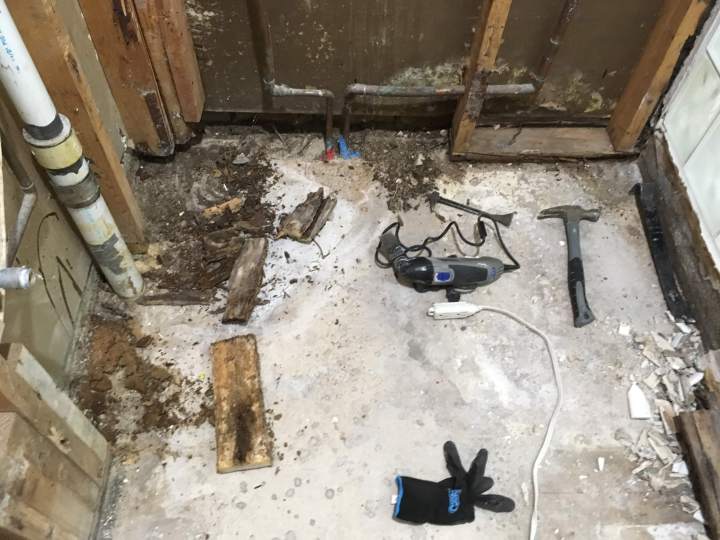 There was therefore quite a bit of wall reframing to do to repair the dry-rotted exterior wall sill plate and to re-frame an interior wall for a new super-tall tiled niche. There was also a lot of work to do to install the new plumbing. The clients chose some pretty fancy German fixtures for a true spa shower experience, including three stacked inset body sprays and a control manifold to send water in three different directions: 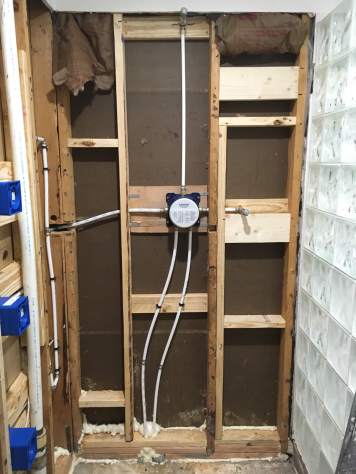 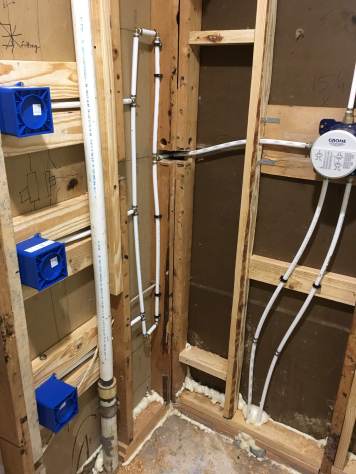 The basic piping was pretty simple, but the fixtures themselves were very exacting to install. For example, the in-wall body spray nozzles and housings had to be installed to really tight tolerances in order to end up flush and level with the eventual finished tile wall. 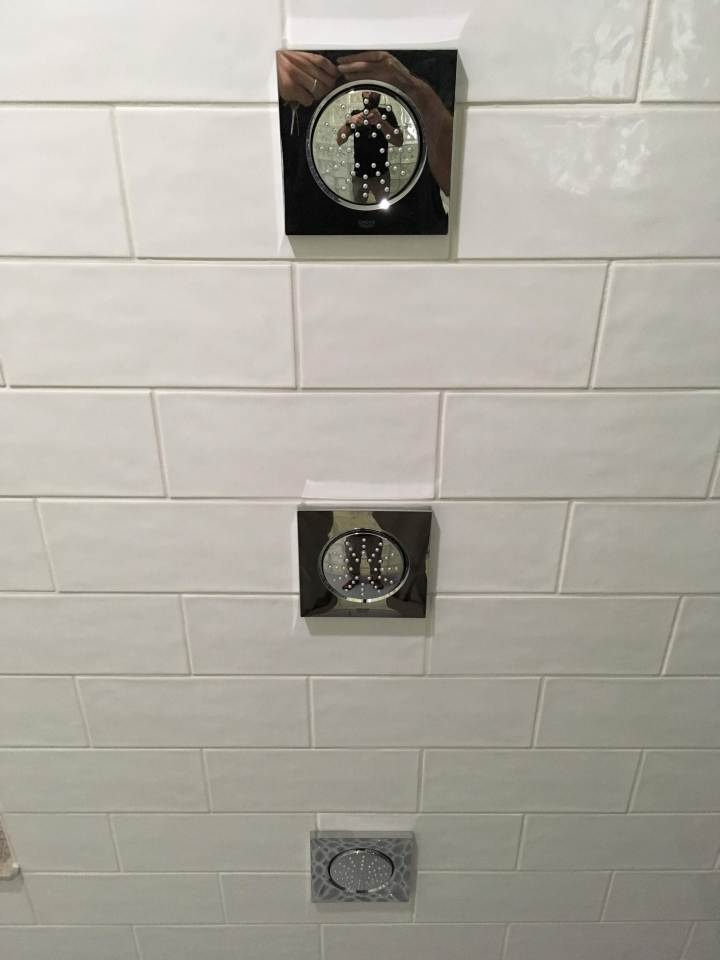 Installing the drain-side plumbing was easy in comparison. After verifying that the original conventional shower drain was in good shape, I simply used a Kerdi adapter kit to convert the drain to a Keri-compatible system. Here are pictures of the step-by-step conversion process: 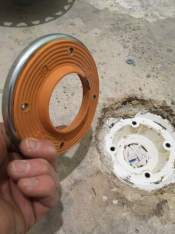 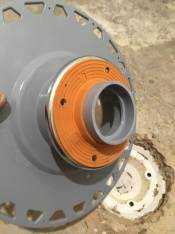 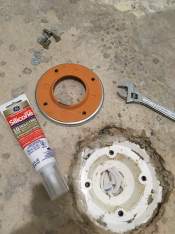 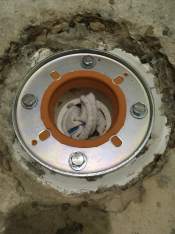 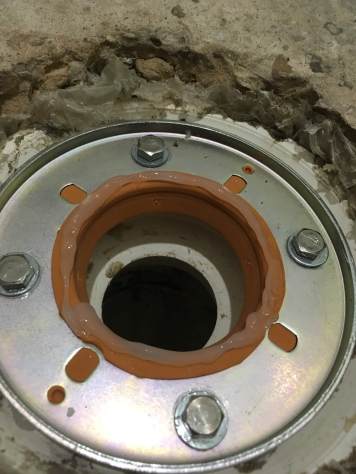 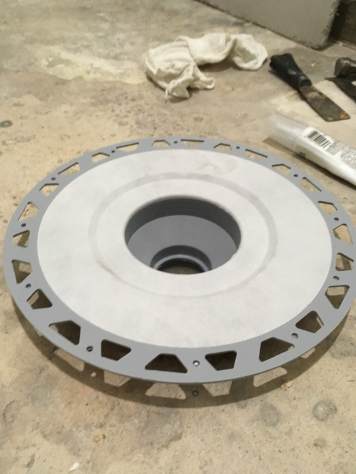 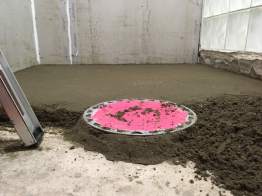 The good thing about drypack concrete is it’s very forgiving. If you have the patience to pack and shape a sandcastle, then making a properly sloped shower floor only requires a little bit of added math and some cut to length guides. 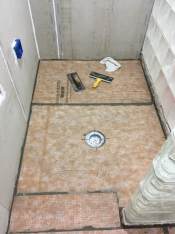 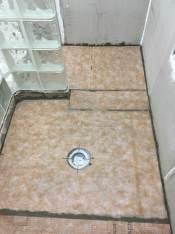 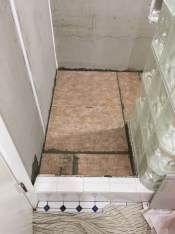 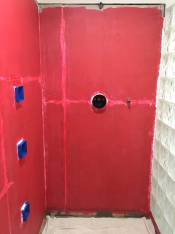 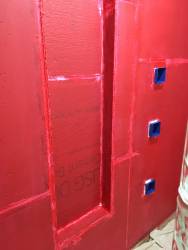 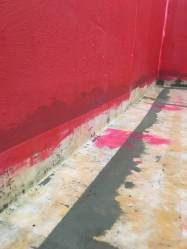 Maybe not pretty, but definitely effective!

With the wall framing fixed, the plumbing installed, and everything buttoned up and waterproofed, the shower rebuild project was now finally ready for the tile install. To see how that went (and to see pics of the final result), just click on this “Custom Shower Upgrade: part II” link! 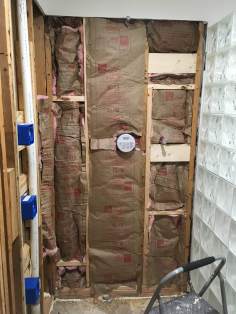 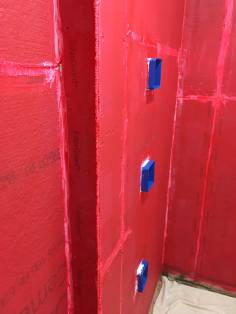 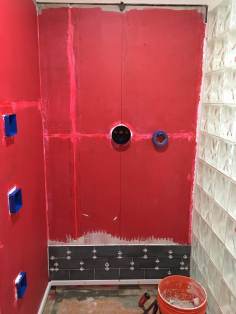